Ideas of the Brave in action: Maker Expo 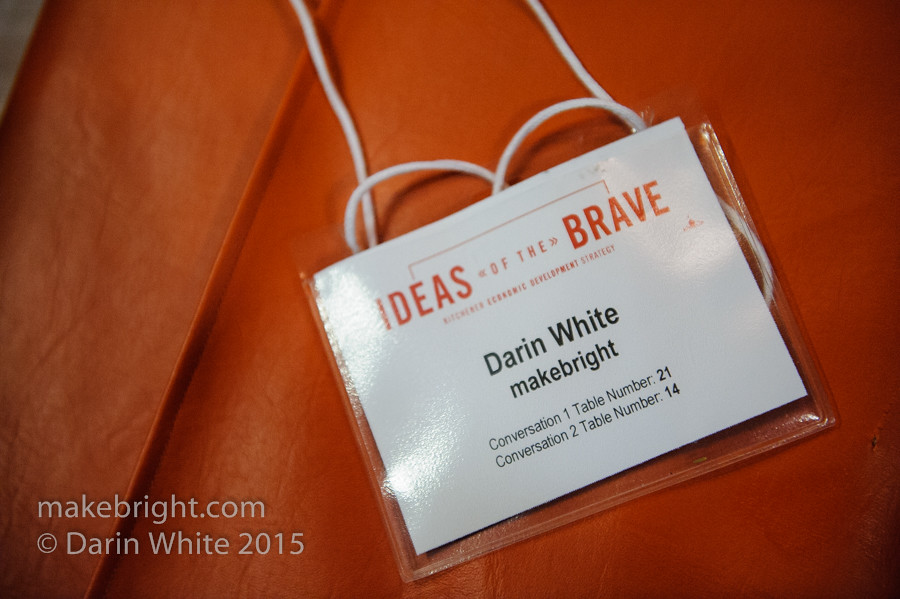 DW in da house: On Tuesday, I contributed to one of the best community figuring-stuff-out session of the past six years. Janette MacDonald, an analyst with Rod Regier’s Economic Development Group at City of Kitchener, rounded up a whack of people to inform the city’s ec dev 4-year strategic plan. It had the delightful side effect of connecting a bunch of hard workers who are very passionate about building the city in which they live/work/play. That was probably the most important part. We can’t look to the City to themselves execute on a vision. That’s our job. That’s how we achieve at scale.

Of course, we were talking a lot about Maker Expo that night. Ravi, Agnes, and Jen from our organizing posse were also there spreading the word and strongly encouraging makers to apply right now to exhibit at our September 19, 2015 event at Kitchener City Hall. Also from kwartzlab were James, Doug, and Bernie spreading the good word about the make-o-sphere. The Maker Expo effort falls squarely in the chart under Things-we-can-do-right-now-to-improve-our-city-life. I’m far more effective doing stuff than I am at talking about stuff. And to that end, happily the City hired me to photograph Ideas of the Brave. To see photos other than this one you’ll have to talk to Janette. High-five to the City of Kitchener for stepping right up and supporting Maker Expo with venue, assistance, info sharing, and introductions. Terrific.

Shout out to Overlap for the collaboration toolset. It was particularly effective to have trained facilitators like Brian Scott at our discussion tables.

I tweeted it Tuesday and I’ll say it again: In Rod we trust. It takes a vision. We can all work our butts off, but to really get there, we need a vision.