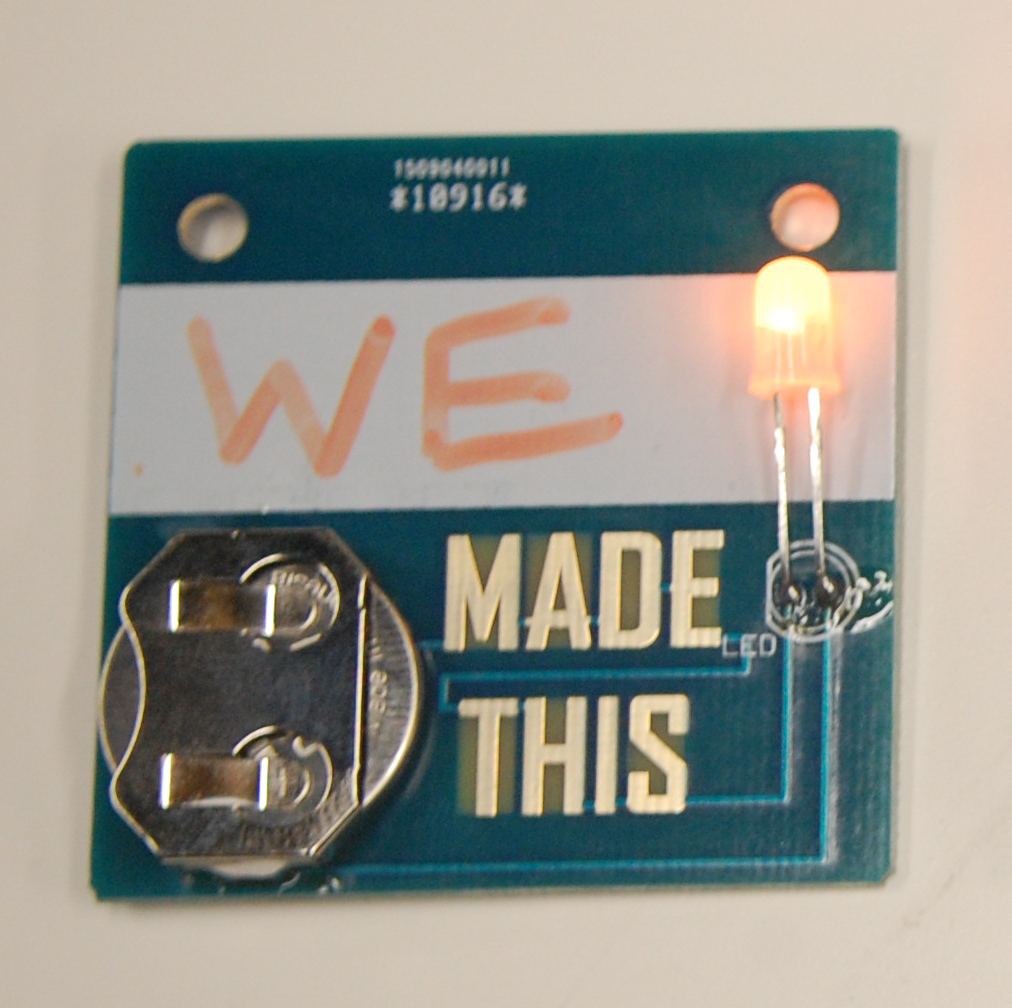 Hello Everyone, Cam here. We’re less than 24 hours from the big event. By this time tomorrow the rain will have stopped and we’ll be in full swing celebrating Waterloo Region’s maker culture. In preparation for that we bring you an account of how our 2015 Learn To Solder badge came to be. Come, read about the maker process, the trial and error and the creative thinking process then come to Maker Expo and build one for yourself.

This guest post was written by “Davenport” (aka Michael Davenport) of KWartzlab, KW Little Theatre and so much more.

“Hey Davenport, do you want to design the ‘Learn to solder’ badge for MakerExpo?”

At first I was confused why Agnes asked me to design the circuit board, since James is our resident PCB wizard. He was the man behind Kwartzlab’s Hacky Halloween fake LED candle, and he made the (awesome! programmable!) SoOnCon badges in 2013. But Agnes explained that “you’ve done design stuff” and “it’ll be fairly simple”.

Fairly simple. Sounds like I’m the man for the job!

From the outset this was more a design project than an electronics project, so I got to brainstorming. My first thought was, “Hey, I can use the Maker Expo logo, stick a LED where the little guy’s head is supposed to be. It’ll be cute!” It wasn’t cute. I abandoned the idea pretty quickly… 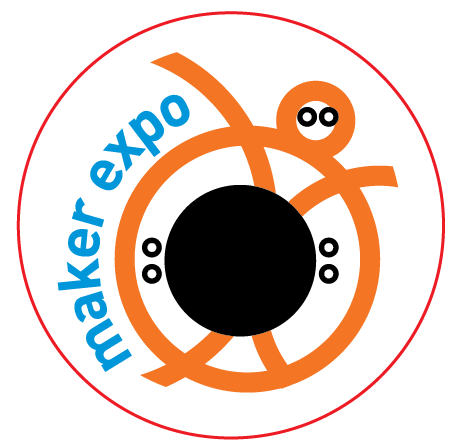 …and you can see why. Ugly.

So I went more in a “hi my name is” direction. 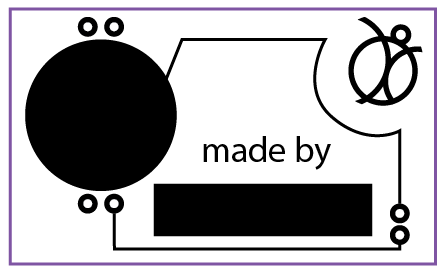 There’s even a spot (which I was planning on leaving copper, I guess it could be silk) where people can write their name. Not bad, but too plain.

When I accepted the challenge, James told me about “Boldport” a group which does really creative stuff with PCBs. After looking at a few of their designs for inspiration, I thought, “How can this be more creative? I should make text a part of the traces.” So I started from scratch again. Here, the words “MAKE STUFF” carry current. And that was intentional. 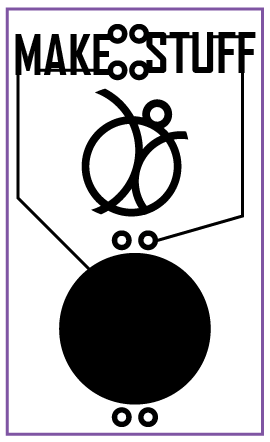 Now we’re talking! This is starting to get interesting! Space for two LEDs, and I think it’s starting to look cool. You know what I miss, though? That bit where people can write their name. So I set about combining the previous two designs… 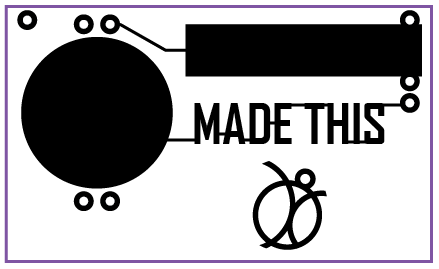 I was working on a variation of this design for a while, to the point where I even had it laid out in Eagle and everything. I had a design, ready to go, with fancy edges and holes to wear the thing as a lanyard. 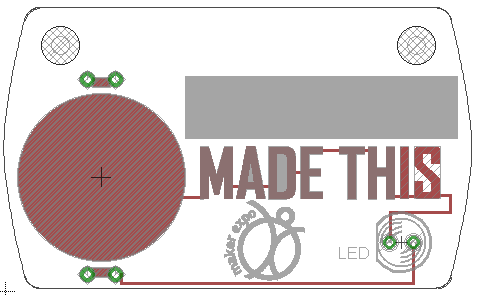 It was at this point where I consulted with James again. This design was 3cm by 5cm, and he reminded me how small that is in real life. Our size-constraint was 5cm by 5cm. So, to take biggest advantage of the space, some elements (like the logo) should be moved to the back (and in copper, to look nice). And we should use the whole space.

So we ended up with this… 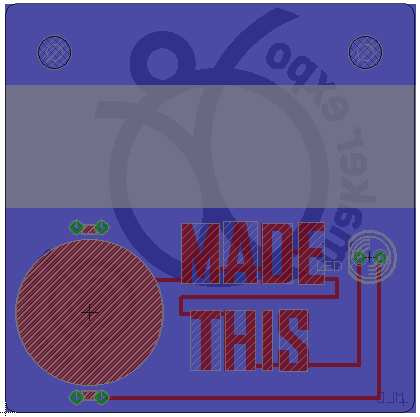 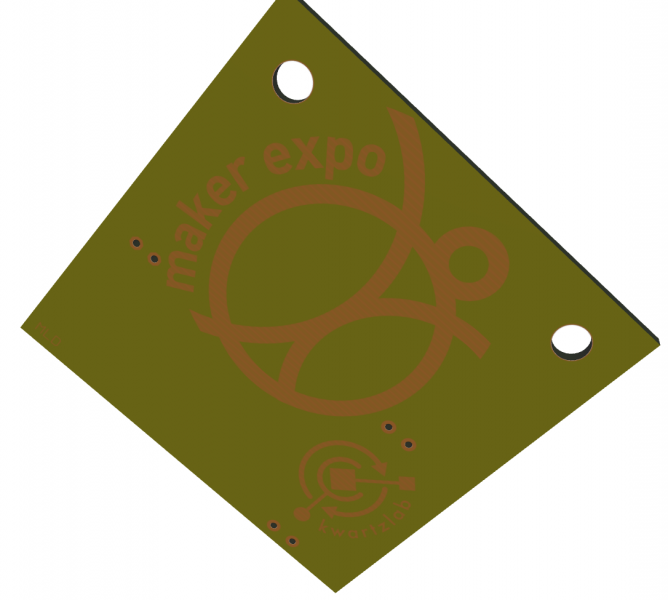 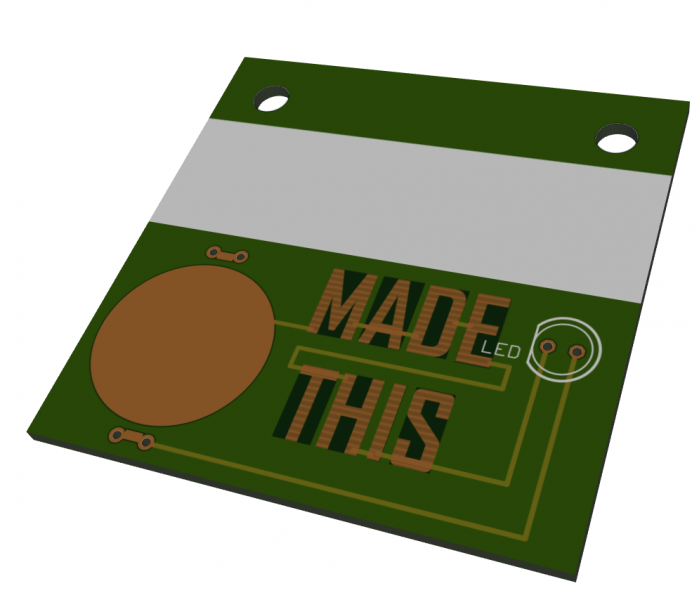 Is this board perfect? No! But it’s the design that we ended up ordering 500 pieces of from a low-volume PCB fab.

That’s when the real fun began. 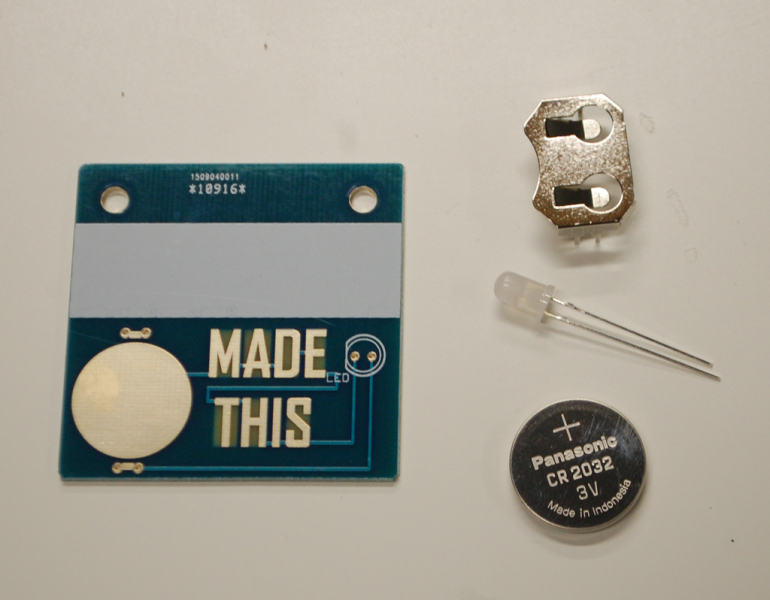 Let’s take another look at the design. The problem is in the back:

The problem is easy to miss, to the point where few people spot it until I point it out to them. The back is a copper plane, a last-minute design change to make the logos really “pop” (rather than silk-screening them). But being one solid plane, those two pads for the LED are shorted together. Right there, next to the “m” in “maker expo”. That connection is not conducive to establishing a voltage across the LED, which is kinda essential for it to, you know, light up.

Luckily James had a fix. So I went on down to Home Hardware, bought a cheap 1/8″ drill bit I didn’t care about. The drill bit had to be cheap, because I did this to it: 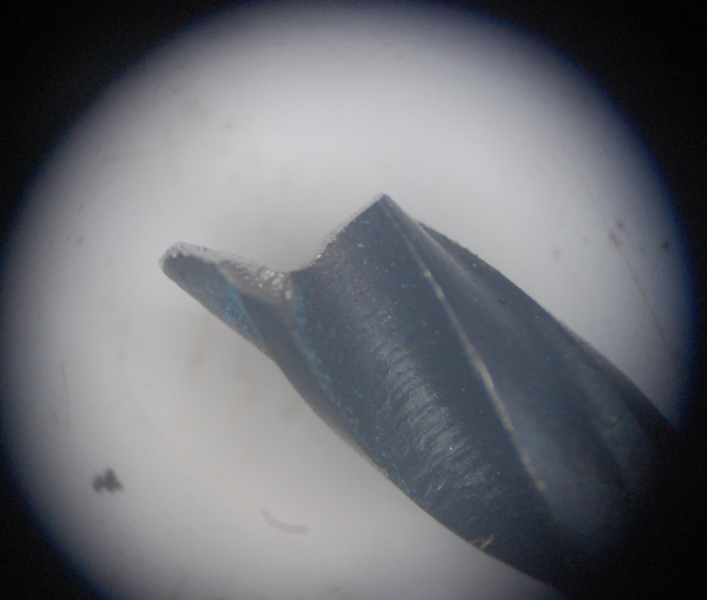 When put into a drill press or milling machine, this bit will cut a neat circle around an area. Or doughnut. Or annulus. Let’s go with that; I don’t get to use that word often enough. This drill bit cuts an annulus. 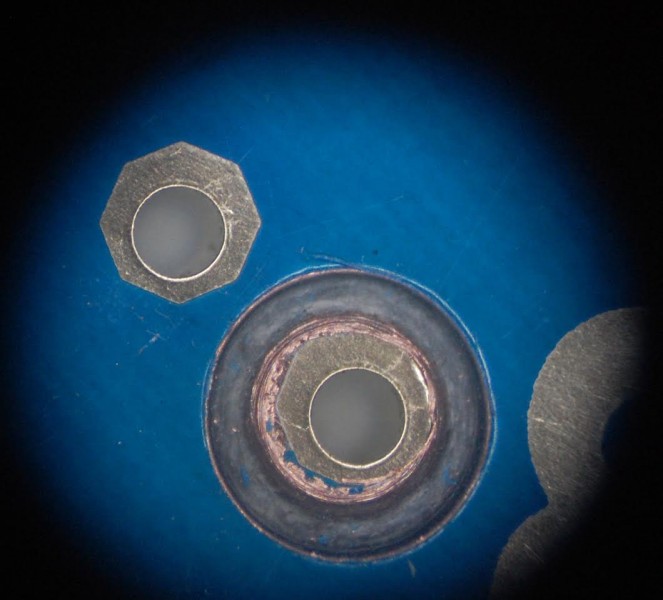 Solved.. Except that now I need to do this 500 times., so that’s what I’ve been doing this week.

I’d say, overall, this has been painful. I’d rather be in a position where I didn’t have to drill 500 PCBs. Would I design a PCB again? Absolutely. And I will not repeat this mistake. Instead, I’ll find entirely new mistakes. But that’s okay! Because mistakes are how you learn. If you never create anything for fear of making a mistake, you’ll never create anything at all.

And at the end of it all, I have a new skill. Skills are useful. 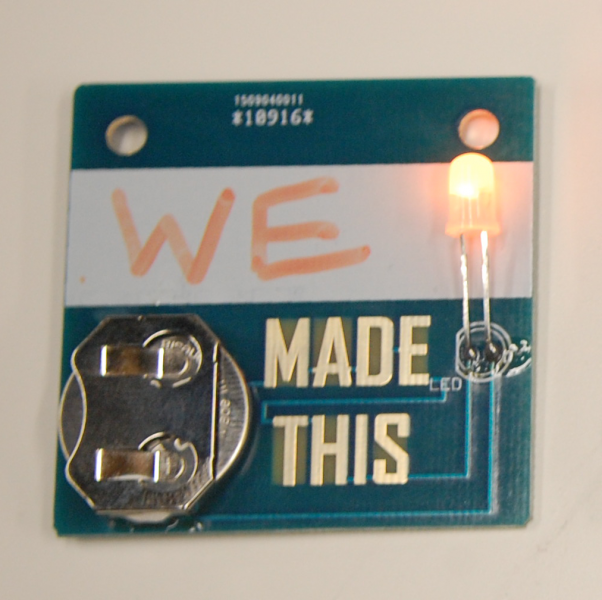