Battlebots – Culture of makers and destruction

With Battlebots back on TV and our very own Bot Brawl gearing up I want to talk a bit about the battlebot and robot combat community at large. We are makers who thrive on destruction as much as creation. For us fire isn’t always a bad thing, we don’t understand fuses and there is no such thing as a ‘bad day at the office’.

–
Before we get into that lets not forget Maker Expo is calling for volunteers! We are looking for a great bunch of people to push ME from great to awesome! Help us promote the event, lend a hand day of or help run the robot fights! and more!  Sign up here to volunteer!
–

So, robotic combat? Battlebots? What exactly are we talking about here? 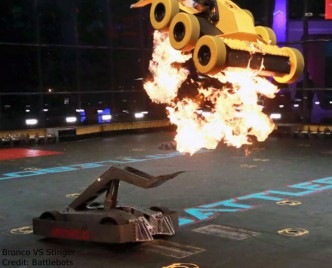 Custom built machines designed to beat other machines into submission.
It’s that simple.

We are the builders, the architects of chaos, the draftsmen of destruction.
There is a rich international community behind this bizarre hobby. There are teams in every corner of the world and a handful of events supporting them. From Canada to Brazil, UK to Germany and of course Australia.

Our community consists of maker’s first then engineers, teachers, plumbers, prison guards, software engineers, chefs and students.
We have members from all walks of life. The thing that binds us is the battlebox, the fight.

How does it start?

Well first you see this. 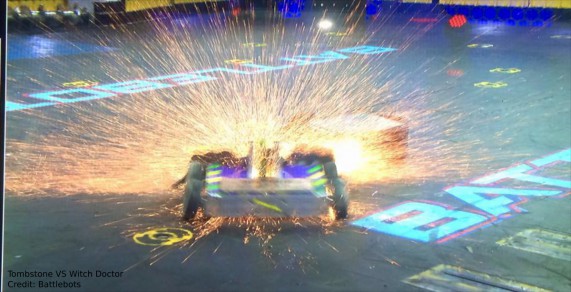 Thousands of joules of energy. (Think 50 caliber sniper round kind of energy)

Maybe you see it on TV, youtube or at Maker Expo. Now you’re hooked, you want more you NEED more.

You are one of us.

Your evenings and weekends become saturated with research and design theory. You don’t quite look at your garage or lawn mower the same anymore.

Eventually you find the community and begin asking questions.

Setting your sights on a local event like Canada’s own Bot Brawl you get a robot together and make the trip.

Here is what to expect. We don’t understand fuses, why limit your system? Why build a failure point INTO the machine? Run it as hard and as hot as possible until the wires melt and the batteries explode (yes that is a thing, you get used to it).

We push man and machine to the limit, often to the point where destructive power is near insanity. Working 48hrs straight without sleep or food right up until the event. I’ve been to events where I’ve worked 36hrs straight only to get in truck with some friends, sleep the 9hrs to the hotel and get right back to it with 8hrs before the fights start.

Why bother pouring hundreds of hours into building these things knowing they might get destroyed?

We do it for the passion. We do it because we are makers.

There is no feeling better then entering the arena with a cheering crowd. Nothing more exciting than hearing the sound of tearing metal. The guttural chest deep impact of two robots colliding at full speed is unique to our world.

Two robots, two drivers out for blood and oil. I want them dead and they want me dead. Its gladiatorial life, we are there to fight.

Its an amazing feeling and amazing event. There is nothing but hate in the arena during a fight. We WANT mayhem, we WANT to put on a show, we WANT to show you what we can do.

That being said, the combat robotics community is the best maker community I’ve ever known. Outside of the arena we will drop everything to help someone repair a robot. We will offer up hundreds of dollars worth of spare parts if only to get you back into the fight.

There is also an unspoken rule of combat. Avoid doing damage that cannot be repaired.

Get approval from your opponent for that last crippling blow if only to put on a good show.

We are all in the same boat, sleep deprived, injured, hopeful.

Then when it’s all over, we enjoy some well deserved beers and talk about next years designs.

This is the life of the combat robot builder.

The endless strive for greatness. 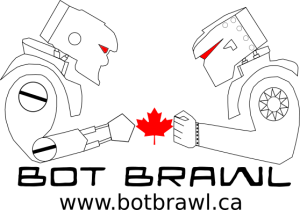 Bot Brawl Event #1 won’t be quite as brutal.

But it will be awesome.
See the bots @ Maker Expo!

Get registered today for Bot Brawl!