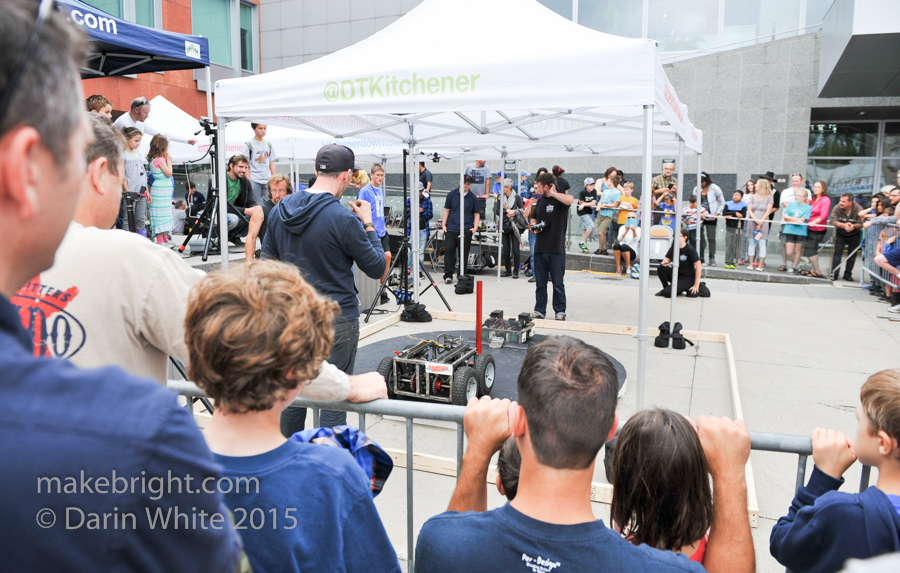 Was it a little chaotic? Sure, but it was an organized frenzy of learning, making and fun!

Hello Maker Expo fans! As we near the end of the exhibitor application window (July 1st at Midnight!) we bring you another all-star maker interview. Ravi ‘BotBrawl’ Baboolal is of course also a member of the Maker Expo organizing team but today we’re talking about his ROBOTS! Fighting, , , , , ROBOTS! [ed: See Battlebots for carnage, BotBrawl is a sumo fight.] – Cam

Cam: What did you love most about Maker Expo last year?

Ravi: I loved the sheer energy of the event. There was so much going on, so many smiling faces, happy children and awestruck adults. As I walked through the event or looked out from my stage I saw a great mix of people all having found something of interest. Was it a little chaotic? Sure, but it was an organized frenzy of learning, making and fun!

Cam: Last year you launched BotBrawl at Maker Expo. How has it grown since then and what are your plans for the next few years? Should we expect to see this at more maker events in 2016 and 2017?

Ravi: Our very first event at Maker Expo had an amazing response, since then I’ve received a number of emails from new teams wanting to get in on the action. We’ve now established a bi-annual event schedule, one at Cambridge Arts Festival (THIS WEEKEND: June 18th, 2016) and of course the big Maker Expo event. We’ve expanded the playing field and over the next few years we plan to expand the types of robots in the competition.

Cam: You recently got back from California filming for a robot centered TV show. Can you share any details with us? Will that have any impact on your application for Maker Expo this year?

Ravi: I was in Los Angeles for 2 weeks filming a TV show called Battlebots. 250lb monster robots fight it out using all sorts of deadly and very real weapons, it was great. My team was one of 48 competitors and our robot is named Lycan. Lycan is 250lb of awesome and will be on display at Maker Expo! You can watch the show on ABC, one of our episode aired on May 10th but the season truly kicks off on June 23rd. 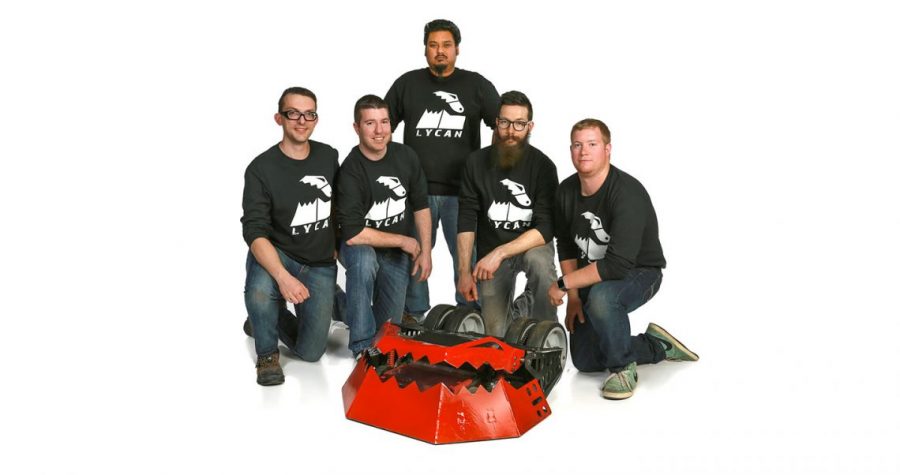 Cam: Do you have any tips for this year’s exhibitors based on what you learned last year? Any insider tricks to help the day go smoothly from behind the table?

Ravi: You will be much busier then you expect so bring some water and be ready to talk. This isn’t a science faire with people passively checking you out. You’ll be engaged by interested kids and adults alike and I can promise they will ask you questions you’ve never before considered. In short, bring your A game!

Be prepared to ‘go with the flow’ especially if you are outside. The volunteer team putting on the show will do their absolute best but cannot control the weather. If there is a bit of rain, bare with it because the people attending won’t let up! Heck we were fighting robots in the rain last year and people were cheering us on from under umbrellas!

Cam: Can you give us a hint about your application or ideas for this year? Fire? Helicopters? Any more celebrities coming to battle like the Region’s Mayors did last year?

Ravi: Well the bots are back of course, bigger, badder and even cooler than last year. We’ve expanded our playing field from an 8ft circular arena to a 10ft circle to give the big 150lb bots more room to play. We are also planning a kid friendly portion….we’ll put some lucky kids behind the controls.

I’m hoping to have the mayors down again for another robot battle, I’d really like that to become an annual thing to show the cooperation between Kitchener, Cambridge and Waterloo. Maker Expo and Bot Brawl invite people from all 3 cities so it’s great to see the same level of cooperation on the municipal level as well. 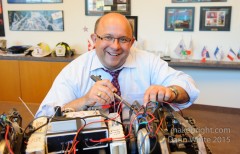 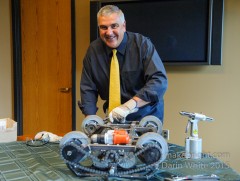 Cam: Besides your own, what kind of exhibit do you really hope to see at Maker Expo this year and why?

Ravi: First off, Id really like to get to see more of Maker Expo itself. Last year I was so busy with the robot battles I was only able to run in a few times. If I had to choose I’d like to check out the rocket launches and the number of cool startup exhibits. My 2, 3 and 4 year old nephews LOVED the rocket launches last year, they wouldn’t stop talking about them and certainly didn’t want to leave, I need to check that out this year. Waterloo Region is home of Canada’s greatest startup community and I love seeing all the innovative companies and products coming out of the area.

Cam: Do you have anything else you want to share with Maker Expo fans or potential exhibitors?

Ravi: Thank you for showing up last year, thank you for standing in the rain with me and watching robots fight it out. Thank you for supporting your community and helping to inspire todays children so they can be the engineers, artists, musicians, chefs, teachers, programmers and leaders of tomorrow. Thank you for allowing me to share my unique and crazy passion of fighting robots with you and your families. I hope to see you all again this year!

If you are thinking about applying to be an exhibitor then do it now before you miss out, trust me you don’t want to miss out.

Cam: Thanks for taking the time to chat with us Ravi. Good luck with the bots!